Hundreds of IT-related deaths in the NHS every year? … why the full truth will never emerge

Two academics have given talks in London about the number of NHS patients who might have died because of IT-related problems.

Their comments come almost exactly five years after the Francis report into the “appalling suffering” of patients at Mid Staffordshire NHS Foundation Trust. The Francis report criticised an NHS culture that lacked candour and openness. Has that culture changed?

One of the academics was Martyn Thomas, a visiting professor in software engineering at Oxford, Aberystwyth and Bristol universities. The other academic was Harold Thimbleby, professor emeritus of geometry at Gresham College in London and professor of computer science at Swansea University.

IT is used in nearly every area of hospital activity, from storing and retrieving medical record to making appointments. Technology is also embedded in devices hat include MRI scanners and dialysis machines.

Speaking at a briefing before a lecture, Thimbleby said: “If you go into a hospital there isn’t a good word to describe how bad stuff in a hospital is and how unaware people are in hospitals of the low quality: they’re stuck with it. They’re over-worked, they’ve got a job to do and understanding the computer systems isn’t part of their job …”

He added that NHS computer-related deaths each year of between 100 and 900 people could be a big underestimate.

Thomas described how research in the USA has shown that 8% of all deaths are caused by errors in hospitals. In the UK, this could equate to tens of thousands of preventable adverse events in hospitals, he said.

He added that a significant proportion of clinical negligence claims in the NHS are due to poor and buggy computer systems that lead professionals into making mistakes – which are blamed on the professionals.

Thimbleby and Thomas called for better regulation of healthcare computers and more research into the implications of errors.

A Department of Health and Social Care spokeswoman told the Press Association,  “Patient safety is our priority, and our £4.2 billion investment in technology will help eliminate avoidable harm.”

But do hospitals generally report IT-related incidents that cause – or are suspected to have caused – harm?

Three year-old Samuel Starr died in the arms of his parents as his they read him his favourite stories at the local hospital.

At an inquest in 2014, his parents, and specialists, raised questions about whether long delays in arranging appointments on a new Cerner Millennium system at Bath’s Royal United Hospital, which replaced an old “TDS” patient administration system, was a factor in his death.

Ben Peregrine, the speciality manager for paediatrics at the RUH in Bath,  told the inquest:

“Samuel’s appointment request must have fallen through the cracks between the old and new system.”

After successful heart surgery at 9 months, Samuel should have had regular scans to see if his condition had worsened. But he didn’t have any scans for 20 months, in part because of difficulties in organising the appropriate appointments on Bath’s new Millennium systems.

Though there is no certainty, Samuel may be alive today if he’d had the scans.

A year after the inquest, one of the supplier’s announcements on its website was about the success of its go-live at the Royal United Hospital, Bath.

“Royal United Hospitals Bath NHS Foundation Trust and Cerner have been working together to implement Cerner Millennium Maternity functionality in a RECORD TIME! It took only three months from the start of the project to its “go-live”! This is a first in the UK!

The success was in maternity – not paediatrics where Samuel Starr was being treated – but there was no reference to any Cerner-related implementation problems at the Royal United Hospital.

As the Francis report into Mid-Staffordshire trust’s failings found in 2013, the NHS has its own “house style” for how it handles the reporting of its not-so-good news – or suspected harm – to patients.

The Royal United Hospital Bath has a “normal” NHS way of reporting IT-related matters. It has an NHS-specific “good news” house style that hasn’t changed in decades.

One Royal United board paper reported that it had “only” 14 breaches that month [November 2017] of its target for treating patients with suspected cancer within 62 days of urgent referral by a GP.

And anyone looking in the hospital’s board papers for details of its recent IT-related problems would have no answer to any of these basic questions:

On 7 November 2017, Royal United Hospital implemented what it called the “Big 3”. The first of the Big 3 was the “Cerner Millennium EPMA”. There was no explanation in the board papers, at least for the benefit of non-executive directors, of what EPMA meant (electronic prescribing and medicines administration).

The second of the big three was “First Net”. Again no explanation that it is a Cerner product that helps to support triage and tracking, ordering tests and recording results, integrating documents into the patient’s electronic medical record, providing discharge plans along with GP follow-up instructions and prescriptions and management reporting.

The third of the Big 3 was “order comms” which, again, had no explanation. Order comms replaces paper by allowing doctors and nurses to order things electronically such as x-rays and receive updates on their systems.

More importantly, the Royal United Hospital’s board papers omit to give any context of the Big 3 go-live. What will it provide that numerous go-lives and past updates haven’t provided? No answer.

The RUH was one of the first computerised large hospitals in the UK. It bought into the controversial Regional Information System Plan of Wessex Regional Health Authority. The Plan wasted millions in the early 1990s.

Subsequently Tony Blair introduced the ill-fated NHS IT programme – the National Programme for IT [NPfIT] in the NHS. In  2002, the Royal United Hospital bought into that too. It replaced its Wessex “TDS” system with the Cerner electronic patient system from BT, one of the NPfIT suppliers.

The NPfIT was dismantled in 2011 with losses of billions of pounds, though some hospitals including Royal United, continue to use updated NPfIT systems.

The new Big 3 go-live went well, according to a report to the Royal United Hospital board. It said the “systems went live within the proposed project timescales” and the go-live “was successful overall”. But there’s no explanation of what didn’t go well, merely a brief mention that a “unified focus was required to complete the project”.

If you look carefully amid the graphs, bar charts, diagrams and statistics of the board papers, it’s possible to see that not everything went well. There’s a chart that shows a significant fall in emergency patients seen within the target of four hours when the Cerner systems went live. The fall is shown on a chart that looks at first as if it’s positive news: it reports the results of a “4-hour maximum wait in ED (Emergency Department) – improvement trajectory”:

And the last paragraph of text that accompanies an obscure chart in a different part of the board papers says that the trust’s four-hour wait remains the “trust’s most significant performance issue”. 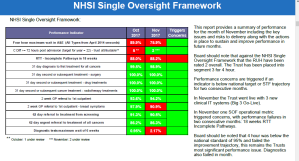 But “normal” NHS house style still unofficially requires an obscure use of language when things go wrong, as if patients are not involved. Hence there’s no mention in the hospital’s board papers of any patients that might have been affected by problems with the Big 3 implementation.

These are some extracts from the Royal United Hospital’s board papers:

Thimbleby and Thomas refer to an unknown number of deaths in the NHS because of a variety of IT-related problems. Nobody has any real idea of the numbers.

That the truth is obscured is not the fault of NHS IT people. They deserve much understanding, even sympathy. They often have poor work environments – sometimes in grim pre-fabricated huts or decaying buildings overlooking the car park – that have the usual hospital disinfectant smells and equipment that would be welcomed by IT museum curators. This post is not directed at them.

It’s directed at the NHS culture of  board reporting that turns up the volume on good news and buries in impenetrable NHS house style bad news.

Thimbleby and Thomas are to be applauded for drawing attention to NHS IT-related deaths. The circumstances of Samuel Starr’s death show that NHS administrative problems can have fatal consequences – yet the NHS generally categorises administrative IT systems as having no patient safety implications.

Earlier this month the National Audit Office reported that thousands of clinical notes went astray under an NHS outsourcing contract with Capita. We were told that nobody was harmed.

Despite the Francis report into unnecessary deaths and suffering at the Mid Staffordshire NHS Foundation Trust in 2013, the NHS trust board culture, at least when it comes to reporting on IT-related problems, has not changed. These were some of the Francis report’s findings that are relevant to IT reporting to NHS boards today:

One of the main recommendations of the Francis has certainly not been implemented.

“Ensure openness, transparency and candour throughout the system about matters of concern.”

Thank you to Zara Pradyer for alerting me to articles about the NHS and IT-related deaths. Thank you also to a local newspaper journalist who alerted me to the trust board papers.

A tragic outcome for Cerner Millennium implementation at Bath.

NHS computer problems could be responsible for hundreds of deaths, academics claim

This entry was posted in Campaign4Change. Bookmark the permalink.

3 responses to “Hundreds of IT-related deaths in the NHS every year? … why the full truth will never emerge”