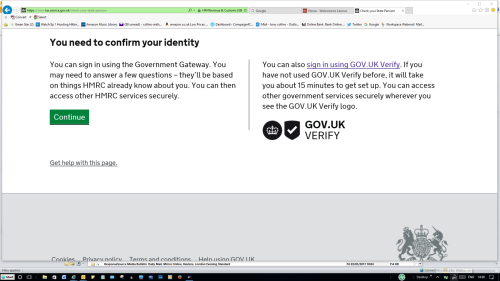 From HMRC’s website on Gov.UK … Which should you choose to confirm your identity?
HMRC and other government departments are offering millions of citizens the choice of two “competing” identity systems – the Cabinet Office’s GOV.UK Verify, or HMRC’s Government Gateway.
There’s no guidance offered on which to choose; and no explanation for the absence of joined-up thinking.

When Whitehall departments do their own thing, the public rarely notices the duplicated time, effort and cost, at least when it comes to IT.  Now the “silo” approach has spilled out into the public arena.

The Government Digital Service – part of the Cabinet Office – developed GOV.UK Verify to enable people to confirm their identify when they want to use government services online.

At the same time, HMRC continued to work on a separate identity system: Government Gateway.

The cost of the two developments isn’t known.

HMRC prefers its own development work on Government Gateway because it enables companies as well as individuals to identify themselves. Verify is designed for individual use.

But instead of adapting one or the other to serve individuals and companies, or using Government Gateway for companies only, central departments are offering both  – with no guidance on which system citizens should choose; and there’s no explanation for the absence of a joined-up approach to IT.

The BBC’s technology correspondent Rory Cellan-Jones says of the two separate identity systems that GDS and HMRC are engaged in a “bitter turf war”.

Today I went online to renew a driving licence and was shepherded by DVLA to use the Government Gateway identity system. A few weeks ago I had already successfully registered with GOV.UK Verify.

Government Gateway didn’t work properly, for me at least, although I had all the correct documents.

When I registered to use a different government service a few weeks I had no choice but to use GOV.UK Verify to confirm my identity. Verify was thorough, seamless and worked perfectly. Impressive. It left the impression of a system that had been well thought out, with the citizen in mind.

Putting aside the fact that Government Gateway did not work for me, it seemed dated, much less thorough than Verify, and left an impression of transience – that it was a temporary “make-do” system. For instance, the help screens were not tailored to the particular question being asked. Not impressive.

For me. GOV.UK Verify is the identity system of choice. It could surely be adapted to confirm the identities of companies – unless HMRC would rather continue to do its own thing.

A few weeks ago departments were offering only Government Gateway or GOV.UK Verify. Now many of them are offering both.

A wider point of Whitehall’s dual IT approach to identity verification is that it’s the tip of the iceberg (apologies for the cliché but it’s apt).

With their ICT budgets, collectively, of billions of pounds a year, central departments are, in the main, doing their own thing.

A politician with the clout of Francis Maude may be needed to bang the heads of permanent secretaries together. But even if Maude’s replacement Ben Gummer had that clout – and he doesn’t – permanent secretaries and departmental boards would complain that the Cabinet Office was interfering.

Complaints along these lines would be made, perhaps, in off-the-record briefings to friendly journalists and to the National Audit Office in departmental responses to NAO surveys of senior officials, with the result that the Cabinet Office would end up backing away from trying to enforce a joined up IT approach.

That a genuine joined-up approach to government IT has been talked about for decades and hasn’t happened is largely because, outside of determining of the size of budgets, it is the permanent secretaries and their senior officials who hold power in Whitehall,  not transient politicians.

And bureaucracies always want to keep their departmental empires as intact as possible.

The current two top Whitehall officials, Cabinet Secretary Sir Jeremy Heywood and John Manzoni, chief executive of the civil service, are consensus-seeking people, not at all confrontational. Probably their lack of a controversial edge is one of the main reasons they were chosen for their jobs.

All of which means there’s no chance of permanent secretary heads being banged together in an effort to cut costs and help bring about joined up government IT .

In 2012, Francis Maude, then Cabinet Office minister,  said, in a speech to the FT Innovate Conference,

“In the last decade our IT costs have gone up – while our services remained patchy. According to some estimates, we spend more on IT per capita than any other government.”