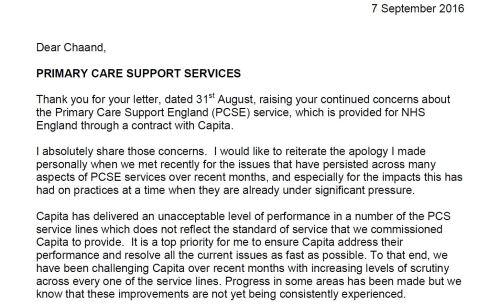 NHS England to GP Committee of the BMA

NHS England’s national director for transformation and corporate operations, Karen Wheeler, has issued an apology for the ‘unacceptable level of performance’ from Capita in the letter to the British Medical Association’s General Practitioners Committee chairman Dr Chaand Nagpaul.

A Capita spokesperson told Pulse,  ‘We fully recognise that the services we provide play a key role in supporting primary care providers and apologise for the level and varied quality of service we have provided across a number of PCSE [Primary Care Support England] services.’

Some of the problems on the contract are outlined here.

“In some cases, GPs have had to hold their first appointment with a new patient without their medical records to guide their decision-making, because Capita has not transferred them in time. Even some urgent requests to process records quickly because a patient had a medical emergency have not been acted upon.”

“Local GPs are reporting to the BMA that they are facing unacceptable delays in patient record transfers and mistakes in maintaining supplies of crucial medical equipment like syringes and even prescription pads”, said Dr Chaand Nagpaul.

The Guardian said a new survey of local medical committees, which represent GPs, found that family doctors in almost every area of England had experienced problems with Capita’s performance.

It’s unusual for any major technology company to apologise publicly for problems on an outsourcing contract, in part because of commercial sensitivities and also because it’s not the supplier that has the ultimate responsibility for a service provided to end-users, in this case GPs.

However, what makes this outsourcing contract unusual is the open and forceful complaints of GPs – and medical organisations that represent them.

Usually in any major public sector outsourcing deal – such as those involving local councils, central government or NHS trusts –  both sides, supplier and client,  have a mutual interest in keeping any problems secret.

In the case of the GP Support Services contract, the end-users are doctors who, as a profession, will tend to express their concerns about private contractors publicly.

What a refreshing change. It’s only through openness when things go wrong that there is a likelihood of effective accountability for the way public money has been spent, or misspent.

It’s clear the problems are not all Capita’s fault. In trying to save money by outsourcing, officials at NHS England probably dismissed negative stories about failings on some outsourcing deals as ungrounded media speculation.

Were anyone ever to be held responsible it would probably be the wrong person, such as a middle-grade manager who was only doing what senior officials expected.

id officials fail to probe deeply enough into the many things that could go wrong on such a complex contract?

NHS England has expected Capita, in essence, to learn a foreign language in a matter of weeks. Should anyone be surprised that what some GPs warned about before Capita took over has come about?

In 2015, when Capita was chosen as preferred bidder for the outsourcing of GP support services,  the General Practitioners Committee’s then deputy chairman Dr Richard Vautrey  said the committee had ‘grave concerns’ over the plans.

But even before NHS England received bids for the outsourcing contract, the then head of the contracts and regulation subcommittee of the GP Committee, Dr Robert Morley, told Pulse,

“The portents are absolutely horrendous for general practice I’m afraid…There’s nothing at all that reassures me this isn’t going to be an absolute bloody disaster.”

Did NHS England consider us in the Capita take-over?

This entry was posted in Campaign4Change, Capita. Bookmark the permalink.